I had the good fortune of catching Parachute perform twice this past month – first as a full band and then acoustically, with only guitarist Nate McFarland and lead singer, Will Anderson.  And it has taken me weeks to come up with the right words to properly introduce them to you – to give this amazing band the justice they deserve and genuinely express my feelings without sounding cliché. 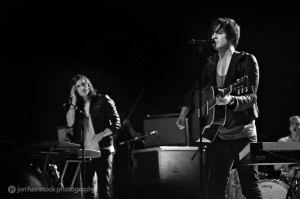 It’s ironic really, when I think about how difficult it is to write blogs about the bands I love the most. Because I go to some weird, vulnerable place as I contemplate sharing my emotion with you all (I don’t know how people write songs, when I can barely write blogs.)  But considering what Parachute has given me through their music, I feel I owe it to them to get this blog out – finally.

The band had their break-out hit with a song called “She Is Love,” which was featured on a Nivea commercial three years ago.  Since then, we’ve seen so many bands utilize TV ads and shows as an outlet for their music.  But Parachute was really one of the first and the song stuck with me.  It is a beautiful, acoustic track and I knew from the opening chords it was a song that would forever rotate on my playlist.  When I was able to hear it performed live and acoustically for the first time, it took me right back to that first moment I fell in love with it.  Here’s my video from the show (I’m not a videographer by any means, so don’t judge on what you see)… it’s all about what you hear:

I can’t honestly say that I’ve been a huge Parachute fan for the past three years, though.  In fact, outside of my obsession with “She Is Love,” I really didn’t listen to the rest of their first album – until recently.  I rediscovered the band this year when iTunes offered “What I Know” (from their sophomore album) for free.  I instantly connected to the track.  Then Amazon featured the entire album, “The Way It Was” for a price I couldn’t refuse.  And I was also being encouraged by a good friend to give them a chance.  And I remember the day I listened to the album so vividly.  I was in a park outside my church in Chicago doing some writing and was taken aback by the quality of each track.  I felt like I was swept into their world, I understood the places they were coming from in each track.  I spent weeks listening to only this album.

Parachute really won me over with their live performances and the brilliance of their lyrics.  After seeing them live it really took my love for them to another level.  “Under Control” is now always on rotation in the bar where I work.  It’s soulful (infused with a pop/bluesy vibe) that I just can’t resist!  Simply put, it brightens my mood beyond belief.  “She (For Liz)” is another one of my favorites from their first album, “Losing Sleep.”  The way they are able to express almost a desperation to have someone but the relationship just not working out – we’ve all been there at one time or another.

You may have heard “Something To Believe In,” when it was circulating various football promo’s on ABC and ESPN.  Now, it’s being played on select radio stations.  The lyrics perfectly describe how I feel about the band and their music – heres the big cliche statement, ready for it? – they give their listeners something to believe in.  Sorry I had to, but really their music serves a purpose.  Every single song tells a vivid story in a way that you can easily relate to, even if you haven’t had that exact same experience, this band takes you there.

The connection I’ve made with Parachute’s music is rare and difficult to describe.  I can’t tell you how many times I’ve cried to “Forever and Always” because it’s so easy to visualize the song as it plays.  It’s a track that truly comes to life with a story that if I told you about it here in this blog, would be like spoiling the end of a movie.  It’s something that you will just have to experience for yourself.  I’m almost embarrassed to admit how many times I have danced in my apartment and down Chicago’s city streets to “White Dress,” which is my anthem! I swear, it’s like it was written specifically for me. And even though I have never been the girl shouting things out from the crowd, I had to ask the guys to play it on Friday. And they did.  It was a really cool moment for me. To hear a song that resonates so deeply, so up close and personal, made my day.  My current obsession since the full band show has been “American Secrets” which starts out up-tempo, and evolves into something soft and beautiful.  During their performance, they take the most sincere moment of the song and stand around the mic singing acapella. It was definitely a highlight of the show for me. 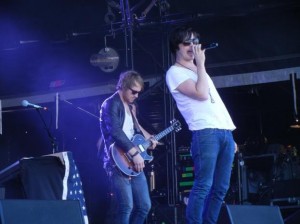 You know, it’s so easy for a band to jump on stage and tell the audience they have the best fans in the world.  But these guys are genuinely appreciative of all the support they get.  Parachute really reaches out to their fan base and treats them with respect.  They come off stage at the end of their set and immediately set out to meet the crowd.  Both times I’ve seen them, they didn’t leave until everyone that wanted to talk, get an autograph or picture with them, was met.  They also utilize social media exceptionally well. Parachute has 120 videos on their official YouTube page and make it really easy for their fans to interact with them.

Will & I after the Block 37 performance

I could sit here and describe all the technical aspects of the music for you, doing what you’d normally expect me to do. I could also try to place them in a genre and compare them to other bands that you like to try and get you to listen to them.  But there is so much more about Parachute that makes them compelling and different from any other band that I know.  Just take it from me – it’s not so much what you hear when you listen to their music; it’s how their music makes you feel.  And I realize this feeling won’t be the same for everyone, thats the beauty of it and the name of the game.  But for this band in particular you can’t go wrong.  It’s about everything they represent through their music and all the things in life they flawlessly capture – faith, God, love, raw emotion, sadness, excitement and beauty.

Parachute is extremely dedicated to their craft and that passion exudes through every line of every song. And even though I much prefer their newest album “The Way It Was,” both albums feel complete, like every track exists for a reason and has its perfect place.  There’s something to be said about a band that can fully develop and release a record.  I have the upmost respect for Parachute and am proud to be able to introduce you to this incredible band.

This entry was posted by Style Bust on December 6, 2011 at 11:21 am, and is filed under Trending Music. Follow any responses to this post through RSS 2.0.Both comments and pings are currently closed.