« Baked goods
San Francisco: Are you ready for Black V? » 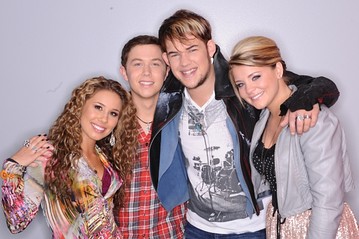 Not sure where to begin with this Idol nonsense.  It may have been the worst top 4 performances that I’ve ever seen.   I was highly disappointed in all the song choices.  I was even more disappointed in the judges and the production.   I have plenty of conspiracy theories, and based on what I’m reading on other blogs and Twitter, I’m not the only one.   The motives behind why they are partial to certain contestants over others is something that I have yet to figure out.  It’s certainly made for a frustrating season to watch as a viewer.

Lets get into it.   James begins the show with “Don’t Stop Believing.” My first thought was, oh, interesting that he’s the lead performer and won’t close out the show.  Little did I know that they would switch it around at the end to give him the “pimp spot.”   So James not only opens the show, but he then gets to for the 4th time this season close it out.   So let’s get around to my second thought, who doesn’t know this song? How many times have you gone to a karaoke bar and not heard someone belt this out.   I think the song choice was a great one, but he didn’t do anything with it.  The judges are always talking about James adding his style to songs.   This could have worked had he have added a rocker vibe to it.

But did anyone even notice that it wasn’t good? He sang off key, it was boring, it was screechy and just plain hurt my ears.   But yet the judges are his biggest cheerleader.  I was looking forwarded to his second performance, “Love Potion No. 9.”  But he added his rock vibe and the song was lost in translation for me.  I guess he’s damned if he does, damned if he doesn’t with me.   But I truly was feeling the acoustic version he was performing for Gaga and could see that as being a better performance.   But what’s the use in talking about James anymore, is anyone listening? 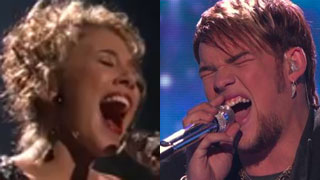 Back to Haley world.  Randy talked about the difficulty in singing “Don’t Stop Believing,” excuse me… “Earth Song” by Michael Jackson is killer.   I know this from personal experience of trying to belt this out alone in my car.  This song is so tough with the notes, runs, and emotion.   I don’t think it was the best song choice for the mere fact of having to cut the song time down.   This is a perfect song that you can’t change, it has an impeccable amount of build up and explosion.   It didn’t translate well because she had to make the jump from a calm soulful beginning to screaming emotion.  Sooooo the judges didn’t like it, imagine that.   And this time I could see where the comments were coming from, where other times I think that they are way off.  But they are always picking on her.   The problem I have is how they went on and on about it.   It has to be so hard for her.  I know people don’t like to see her talk back, but put yourself in her shoes.   She’s just trying to defend herself.  I wouldn’t care in the least if they were giving the sort of feedback they give her to everyone.   James performed that Journey song right before her and it was terrible.  But all James got was praise, it’s getting to be ridiculous how much they hate on Haley.

Even after watching two more contestants perform, the judges go back only to reiterate the fact that Haley’s performance was the worst.   This is just moments before her second performance on a live show.  How does one pull themself together?   They completely rattled her and I think that was the goal.  I thought this week would play in her favor since she did such an incredible job last week with her rendition of Gaga’s “You and I.”  Funny how not much if anything was mentioned in the reel about the performance.   I know that footage has to be there, Gaga would have said something about it upon meeting her.  I also have a strong feeling that Gaga digs Haley’s voice and style.   It’s interesting that there wasn’t a whole lot to take away from the Gaga clip with Haley, besides an acting/drama lesson?   Her second performance of, “I Who Have Nothing,” was certainly an improvement.  I would have liked to have seen her do a more exciting/fun song.   Thankfully she didn’t because it would have been hard to come out and have fun after the first round.

Scotty, I want to give him the benefit of the doubt with the Alan Jackson song, “Where Were You When the World Stopped Turning.”   It’s hard though, I think mostly due to my PR background, I’m always questioning peoples motives.  I mean come on, could this type of song be chosen at a better time?   I really don’t think so, and I would find it hard to believe he wasn’t prepped for the pre-interview for the song.   He said all the right things.  And he’s just a kid, to capture that emotion has got to be difficult.   He had to of been about 6 years old when 9/11 happened.  However, I will say this… he did an excellent job of telling the story.   As much as I was doubting his involvement with the song choice, there were moments in the song that gave me the chills.   Which, again is probably due to everything that is happening in our country right now.  It was a smart move.  Now his second song, lordy… so bad.  He performed, “Young Blood,” by the Coasters.  What were those crazy eyes?  I have no words.   The young girls love him, I don’t think that performance hurt him much as far as voting is concerned but really what was that?  So creepy. 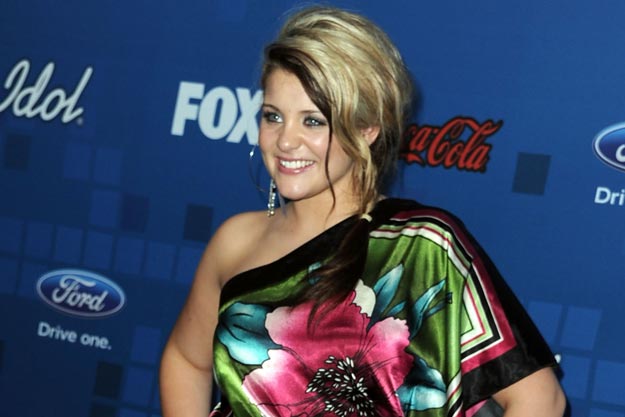 Both songs Lauren performed were amazing.  She is my overall winner of the night, hands down.  I was worried how she would recover from her near departure last week.   She sang Martina McBrides, “Anyway” and Elvis Presleys, “Trouble.”  I mean the second song was a little out there, because she’s the furthest thing from evil. I think it could have been better had she have been able to channel the character a little more.  But wow, the first song she just belted out beautifully (again a song about natural disasters, could it have come at a better time?)  And the second song she had fun with. It was a great night for her.

This entry was posted by Style Bust on May 11, 2011 at 7:48 pm, and is filed under Trending Music. Follow any responses to this post through RSS 2.0.Both comments and pings are currently closed.