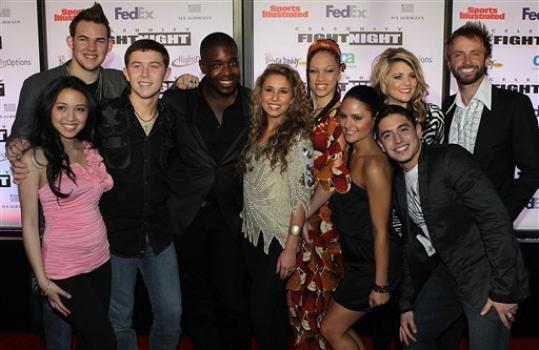 Mo-town week on Idol is always enjoyable for me and this year it wasn’t any different.  In fact everyone performed so well that it could have been one of the most entertaining shows in Idol history.  It was the exact kind of revival I needed to get back into the show. (editors note: as requested each week I will start linking the performances to the article, all you need to do is click on the contestants name when listed in the post – but I don’t always talk about all the performances so you can always catch them on the American Idol website).

Outside of the changing of judges this year on Idol they have added so much to the show by giving the viewers an inside look into the performers studio time.  I think this adds more credibility to the show. It makes it less karaoke every week and more music business centered. I love that they show this side of the artistry.  Last night there was a feature on Mo-town that really moved me.  It was a short feature but fairly in depth when it came to capturing the vision of Mo-town and the entire movement.

So where to begin… Jacob Lusk.  I was ready for him to go home last week, he’s not one of my favorites by a long shot.  But OMG his performance last night, brilliant.  So captivating and perfect.  He was coached well, thank God this year for Jimmy Iovine.  This is a performance that you need to watch here on YouTube or on the American Idol website.  It was truly a magical moment.

Haley’s voice suits Mo-town music well, so I was looking forward to her performance this week.  I thought the chances of her choosing a bad song were pretty low.  I think she delivered, however, I don’t feel like she is choosing songs that showcase her unique voice.  I love her sound and I can see the potential in her, I just wish someone would push her to make better song choices.

Paul brought out his guitar this week, something I have been really looking forward to.  I’m biased so I enjoyed it.  I just feel like Paul is representing everything I love about the music industry, like I finally have someone on my team on the show.  But as I try to watch the show and get in the mindset of the average viewer it worries me.  Like Jimmy said prior to Paul’s performance he thought he could have a moment, I’m not so sure he had that “moment.”  But he will, I have confidence that he will have a really special performance, sitting with his guitar and playing a quiet, acoustic song.  The judges are asking him to give them more of his tender voice.  I can envision a special Paul performance acoustically.  So we shall see.

I wasn’t disappointed this week by any of the performers.  I thought Pia and Stefano were kind of boring but they sang their butts off.   Scotty did a phenomenal job keeping his classic sound during Mo-town week, proving that he is a true artist.  It was nice to see Thia change it up, it was like I was watching a completely different girl.  She’s just so young.  It’s great that Idol has opened up the competition to 15 year olds but they just look out of place when they are competing against the more seasoned artists.  I wish someone would coach her for what to say in front of the judges.  I feel bad that she’s constantly slipping up and talking herself in circles.

This entry was posted by Style Bust on March 24, 2011 at 10:43 am, and is filed under Trending Music. Follow any responses to this post through RSS 2.0.Both comments and pings are currently closed.