Add these 3 fat-burning snacks to your diet…

It’s safe to say that working out is great and very much a necessity when it comes to losing or maintaining weight, but diet is probably even more important. Eating right not only helps you look good, but feel good as well. Wouldn’t it be nice if food helped burn calories? Believe it or not, there are plenty of fat burning filler foods out there that satisfy hunger strikes and provide energy to help fuel workouts.

I recently read some great advice on some foods to incorporate and why they’re so important to keep us going.  Here are some foods that not only fuel your workouts and keep you full, but they also help burn more calories aside from being active. Try to incorporate these foods into your daily diet and see how much they can affect your weight management or weight loss goals. 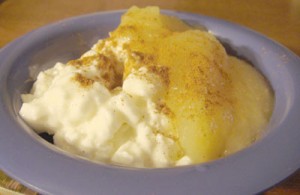 Cottage Cheese – This provides calcium and ladies need calcium, especially when you can see your 30’s creeping near. Some can’t take the taste, some love it. The key is to eat low fat and in moderation – like a few spoon-fulls. I add sugar-free apple sauce and a dash of cinnamon for flavor. Cinnamon is known to suppress the appetite and apple sauce fills some of your fruit requirement for the day. Cottage Cheese is also a dairy protein and supplies casein and amino acid glutamine to burn fat and assist in recovery after exercise. What a multi-tasking snack eh? 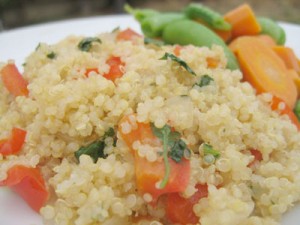 Quinoa – This will fill your grain intake and it’s great to have for lunch, dinner, or snack. It took me a while to acquire the taste, but once I found a way to add flavor I had no problem having about a cup a day. It’s high in fiber which stimulates the release of appetite-suppressing hormones and increases the time it takes for food to move through your intestinal system, meaning fewer calories stored as fat (in other words, keeps you feeling full). This is great with a dash of hot sauce and roasted peppers. I mix mine with a veggie like butternut squash to give it some sweetness while also getting in that veggie requirement. 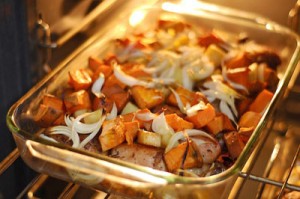 Veggies – It’s important to eat vegetables, but if you’re anything like me, you probably go into the store with the intention of using them, then before you know it, they’re gross and rotten. Not anymore. As soon as you get home from the store, get the baking sheet out, chop away, mix with salt, pepper and olive oil, and then roast. Put them in little to-go containers and munch on them at work. Or, mix with the quinoa – so good! Veggies like broccoli, spinach, and sweet potatoes are superfoods because they saturate the body with health-building nutrients. Incorporating veggies in your diet keeps your body functioning properly and burning fat (even in between workouts).

When adding what’s required daily like dairy, fruits, veggies, grains, and protein it’s amazing to see the energy level spike so workouts, and even the workday, are easier to get through.

How Does this Taste?

Flipping through a magazine or typing Diet in Google’s search engine will reveal well over 100 posts about “live by diets” for “die hard bodies.”  I’m an eighties baby, and my fascination with food started with my mother.  Each week, there was a new cook book or can of chocolate Slim Fast on the kitchen counter.  From then, DIET has been a major area of interest and since trends are ever-changing, I will always have something new to research and obsess about.

Atkins – We are all familiar with this diet.  The watered down instructions are to eat meat and low carb vegetables. ONLY.  Over the years amended versions have popped up, but the goal is to push your body into ketosis.  Then the body will start to munch on fat reserves and convert them to ketones.  Weight drops off quickly, but beware. There can be a significant amount of muscle loss, too.  I’d know.  I did the Atkins diet years ago and swore I’d lost a good two inches from my calf muscles.  My legs were swimming in my knee-high boots!

Fruitarians and Vegan Raw Foodist – would absolutely clench at the mention of Atkins.  Raw foodies have blamed toxins, poor enzyme preservation, and pesticides for weight gain not carbohydrates.  Cooking foods over 116 degrees is said to destroy or alter its mineral make up.  There are more foods on this diet than popular belief.  Beans, rice, millet, sprouts and buckwheat can be soaked and safely consumed.  I completed a 30 day raw food challenge in 2008.  Social events were the worst!!!!! Besides passing up finger foods and having a hefty grocery bill from creating raw cheesecake and lasagna (which I had to toss out),  I enjoyed the clean, renewed feeling of eating mostly organic live cuisines.

I have fallen victim to countless hours of research on food fuel.  Yet, I am still surprised by some of the diet plans I’ve seen and subsequently attempted:

Negative Calorie Diet aka Eating Your way to weight loss – Celery, asparagus, lettuce, broccoli, beets, onions, and cabbage are all said to have a negative caloric property.  If celery only has 15 calories in it, but takes 30 calories to digest, by eating a few celery stalks more fuel is used than it takes to absorb the celery. In turn, (and in theory) losing weight and burning calories is achieved by eating more.  I suspect that ingesting some of the listed foods promote weight loss because they are diuretics.

Mono Diet – Pick one food and eat it.  Preferably something deemed healthy, but I suppose eating only French Fries every Wednesday will suffice.  This past Sunday I had a watermelon feast and ate 2 mono meals of watermelon meat.  Afterwards, I felt light and satisfied…and during sleep I dreamt of eating cornbread with sugar sprinkled over it.

Kangatarian – I have not tried this one…but I probably would if I had access to hopping meat. Kangatarians only eat kangaroo meat. Enough…

Breatharianism – is a related concept to Inedia, in which believers claim that life can be sustained without food and possibly water.  No more tall glasses of Uptowns, rosemary chicken, or greek yogurt sprinkled with ground flax seeds. 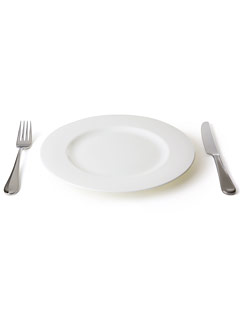 It’s believed, that humans can flourish solely by Prana (the vital life force in Hinduism), or according to some, by the energy in sunlight (in Ayurveda, sunlight is one of the main sources of Prana).  Throughout history, Hira Ratan Manek, Prahlad Jani, and The Fasting Girls (Catherine of Siena,  Lidwina of Schiedam, Mollie Fancher and Therese Neumann) were all spectacles of the growing communities interest in non-eating.

While there is no verified scientific support for these claims, some promote the practices of Breatharianism as a skill which can be learned through specific techniques.   Jasmuheen, a leading expert of Breatharianism in the 1990’s received great ridicule after several of her followers starved to death after an extended period of non-eating.  Jasmuheen insisted that some of these deaths were brought on by a psycho-spiritual, rather than physiologic deprivation.  I love food; the way it feels on my tongue, how it looks on a stranger’s plate.  I even enjoy staring into my lover’s mouth as he chews  breakfast…but I am still very intrigued by non-eaters.  I visited several naturopathic and spiritual advisors and asked them about Breatharians.  I needed to find one in Atlanta and quick!  The answers varied; some dismissed it to severe and delusional cases of anorexia nervosa and one chiropractor said he’d met a “gang of Breatharians at a conference and around midnight saw them stuffing handfuls of grapefruits and Frito Lays into their mouths in the hotel hallway.”

With whatever diet choices you make, measure your success on how that food makes you feel.  Some people can flourish on fried chicken and some cannot!  For help on settling into a healthy eating plan visit Fit Day and Nutrition.gov.

Going Green from the Inside Out 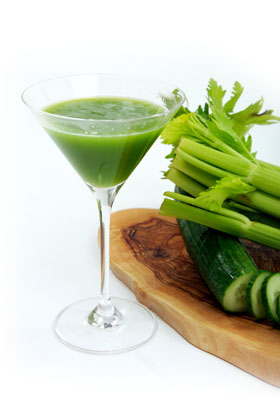 With the advent of high-speed blenders and “Cadillac” juicers, it’s time to take the extra step in Green Living.  After swearing off plastic bottles and going on recycling rampages, clean up the ecosystem that really matters.  We can go green on the inside by introducing fresh, raw vegetable juices into our lives.

Why? This is the #1 Question.
Green Juices Provide The Following:

It’s Gross!!  This is the #1 Complaint.
Ok…OK.  My first swallow of green juice nearly brought a tear to my eye.   I was use to drinking Grape Soda and then washing that down with Hawaiian Punch.   It’s an acquired taste.   The more it’s consumed, the easier it is on the stomach.

Getting started is simple.  A $20 blender will do.  Toss in your veggies, cover with water and blend! If you’re lazy (like me) stop into your local Whole Foods Market or an equal and they’ll juice it up for you.   Rookies should consume “light greens.”  Romaine, butter and endive lettuces have gentle/sweet flavors.  From there, easily digestible veggies can be added…a cool cucumber and celery mix…

Once the stomach adjusts, graduate to more bitter greens like collard, kale and mustard.  If the green drink is too sour, drop in a few of pieces of Granny Smith Apples or a sliver of mango.

Soon enough a chilled green drink will be as appealing as an iced Corona with a lime perched on top…maybe….