On HBO’s True Blood, things may be a bit weird down in Bon Temps and seem to be getting weirder.  With everything at stake, the ladies still manage to look gorgeous.  This Halloween, whether you choose to be Sookie or Pam, human or vampire, keep the costume simple and the makeup on point for that drop dead gorgeous appeal.

If you want to be everyone’s favorite Bon Temps’ girl from Merlotte’s, Sookie, don her t-shirt and apron, and you’ll have your wardrobe set.

Or play the fangtalicious heartbreaker Pam.  Sport a busty top or her not so vampy Cat and Flower Sweatshirt  and play up her sensual nature.

For Sookie, stick to neutrals, pinks and warm tones.  For Pam, go for dark, vampier shades.  The secret is to amp up that unmistakable gorgeous factor depending on your character.

Made in collaboration with beauty standards like Tarte and Deborah Lippmann, try the Forsaken Inspired by True Blood Beauty line for the Halloween party and any other day you just want to feel fabulous and irresistible.

All dolled up, you’re ready to get out there, break some hearts with your fang-talizing beauty that keeps them wanting more.

Have a Fangtas-tic House Party

Get inspired by HBO’s series True Blood and bring the dynamic characters to life by hosting a Fangtas-tic Halloween house party.  In the town of Bon Temps, vampires come back from the dead to live among humans.  Is the synthetic blood that makes it possible too good to be true?  Find out at your shindig – there are sure to be some thrills and chills.

So how will you pull off a macabre party?  With a few tweaks, your home can easily be converted to the Fangtasia Bar, where vampires and humans mingle.   Life at Bon Temps begins at night, so the key is setting a sinister ambiance.  Block out the light with black drapes.   Opt for candles and True Blood string lights, which come with red bulbs.   Cover tabletops and chairs with red textiles like velvet.   Put on the original score, prepare garlic free foods (lest you offend all the vampires) and quench their thirst with enough True Blood beverage warmed to 98.6 degrees.  Don’t forget to make it last from dusk till dawn.   Finally, invite friends over donned in killer costumes, of course.

Invitations: Make your own or use these HBO invites and set the tone

Visual Stimulation: Play Season 1 on mute in the background

Food:  From Bon Temps Bloody Marys to Up in Arms Biscuits and Gravy, make some fang watering bites sure to please.

Scent: Fill up the house with the aroma of Forsaken True Blood Candle and Diffuser

For more helpful party tips, catch up on the latest shows and don’t let your guests go home thirsty.

Get into the Wilfred character and costume and you just might be the hit of the party this Halloween (or at least avoid the doghouse).

In the officially licensed Wilfred Dog costume, you’ll be certified to mentor depressives in your darkly comic and totally unsavory canine ways. If you want to complete the Wilfred look, opt for FX’s Deluxe Wilfred Costume Kit. It comes with a toy cigarette and black nose paint. You too can pretend to be Ryan’s best (and worst?) friend.  But remember: beware of dog – hijinks will ensue!

This Halloween, dress as the Parks and Recreation Department.  The citizenry of Pawnee are in for a real treat.

If you’d like to be the first female President of the USA, then take on the persona of Leslie Knope and inspire all your coworkers to dress as the Parks and Recreation cast.  From Leslie to Ron Swanson, everyone can get into the spirit.  Meet at the pumpkin patch, local park improvement site, or your very own non bureaucratic office.

As Leslie, take charge of the committee and be perky about it.  Remember Leslie is the eternal optimist.  Be prepared for lots of public speaking with a smile, even when people are screaming at you.  They are just caring loudly at you.  For the costume: wear a suit or something casual for the park.  Leslie’s bid for City Council wrapped up in Season 4, but you can still sport Knope 2012 campaign merchandise including, shirts, campaign buttons, and pens.  Be sure to watch your favorite clips and have some of her memorable lines on hand.

Alternatively, dress as fan favorite Ron Swanson.  As Director of Parks and Rec, Ron lets Leslie do all the work.  He sports a mustache and staunch Libertarian values.  While collecting a government paycheck, Ron believes in as little government as possible and feels the parks department should not even run or maintain parks.  He advocates for program cuts wherever possible, and actively works to make city hall less effective, and he especially detests interacting with Pawnee taxpayers.   Ron has a deadpan, inexpressive personality and loves meat, hunting and breakfast foods.

What the What Will You Be This Halloween?

Fans may be bummed about “The Beginning of the End” for NBC’s 30 Rock, but look at the bright side – the season premiere airs this week just in time for Halloween costume inspiration and party banter.

With so many nerdtastic options, which 30 Rock character do you identify with?

How about 30 Rock’s star nerd?  Liz Lemon is a self-proclaimed geek and socially awkward turtle, overscheduled, undersexed, single-pretending-to-be-happy-about-it gal.  She is a great writer but generally dismisses others (see note about lack of social skills), eats a lot of junk food, and is allergic to dogs and cats, which she thinks is psychosomatic.  Are you with me?  To dress as Liz, wear dark rimmed glasses, no frills pants and plain jane shirts or cardigans.  Most importantly, prepare plenty of nerdy sardonic socially awkward witticisms.

Show them how it’s done this Halloween with some of Liz Lemon’s most memorable/nerd lines:

If you’d rather be a cad on Halloween, impersonate Jack Donaghy.  As head honcho at Kabletown, you’ll need to keep it coming with backhanded compliments especially if you’ll be partnering with a Liz Lemon for the evening.  Jack idolizes Ronald Regan and always favors big business over the little guy.  For your Jack Donaghy costume, dress to impress: a suit by day and a tuxedo after six.  After all, he’s no farmer.

Synergize your costume with some of Jack Donaghy’s best musings:

Or if you like to keep things unpredictable,  go as Tracy Jordan for Halloween. Tracy is known to be an off the wall, self-centered prima donna full of conspiracy theories but generally well meaning. You could wear underpants and scream, “I am a Jedi.” Or for the more modest, go with a red jumpsuit and be ready with the lyrics to Jordan’s novelty party song, “Werewolf Bar Mitzvah.” Lyrics include: ”Werewolf bar mitzvah, spooky scary. Boys becoming men, men becoming wolves.”

If you’re going as Tracy Jordan, be ready to party with his gold record winning signature quips:

Whoever you choose – from the geeks, to the cads, or prima donnas – any 30 Rock character is sure to be a Halloween crowd pleaser, especially if you can finesse those zingers!  This season is 30 Rock’s last, so don’t miss out on your final chance to be part of the TGS team and go to there! 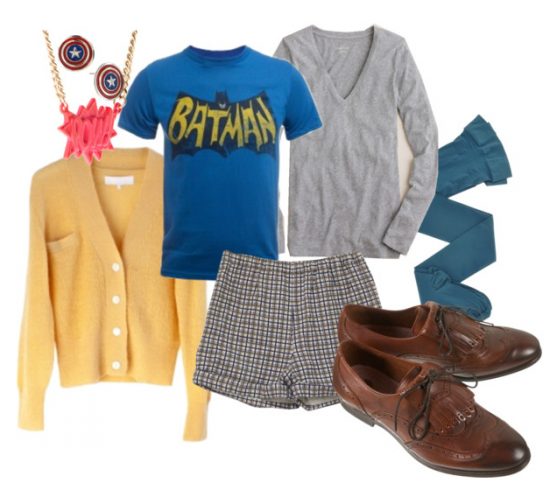